In an effort to improve spine surgery training simulation, we teamed up with west Michigan-based applied Medical Device Institute at Grand Valley (aMDI) to help develop a first-of-its-kind spine model to improve the way surgeons are trained for spinal procedures. Together we developed the S2T Surgical Smart Trainer and readied it for manufacturing and sales. 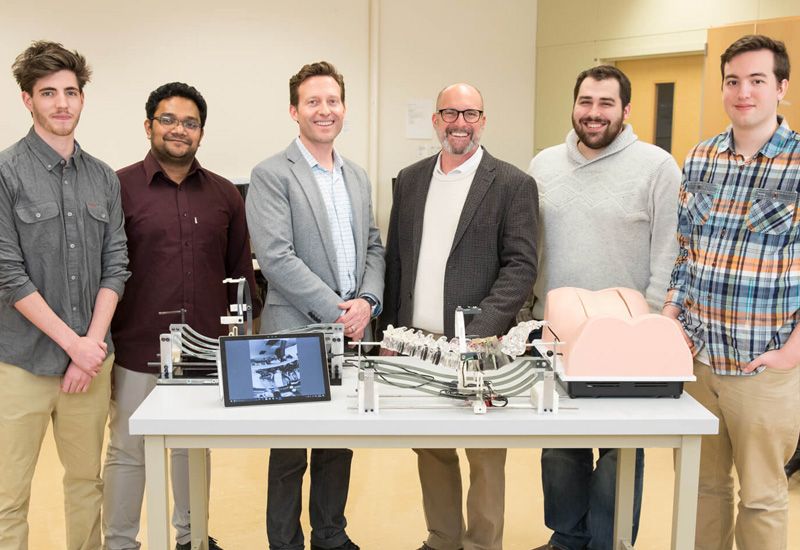 Jim TenBrink, our co-founder and vice president, graduated from Grand Valley in 1997 with a degree in marketing. He was pleased to work with aMDI and feels the surgical training device has the potential to solve many issues, such as high exposure to radiation, and logistical and costly challenges of using cadavers.

The use of cadavers for surgical training is a method that has been around forever — it’s 19-century technology. But we wanted to go beyond that and take surgical training to the 21st century. Not only will the S2T Surgical Smart Trainer spine model help medical device companies expedite sales and surgeon education, it will also help expand their launch of medical devices. In addition, it will provide safer and more cost-effective training for students at teaching hospitals and medical schools.

The first device to launch is designed to replace the use of cadavers in training for minimally invasive procedures. It focuses on the posterior aspect of the spine and is shaped like a torso. Inside the torso shell is a sliding C-arm rail system with mounted cameras that mimic X-ray. A second spine model created for lateral spine surgery will follow shortly.

The prototype we presented to aMDI was lacking the X-ray visuals that surgeons need in order to train outside cadaver labs – the camera system is a crucial part of the device. The aMDI team converted four high-def cameras into lifelike X-ray visuals, visible in real time. The team assembled the cameras inside the shell, which represents the torso, and they can move those cameras in the same fashion as the big C-arm on the outside during surgery. In addition, they also built the rail system that keeps those cameras strategically aligned along the spine.

Cadavers will always play a role in the medical profession but they do have their limitations. They have a limited supply and limited pathologies, so the diseases the surgeons want to correct aren’t there, and they require X-rays. If you think about X-rays, you’re limited to a hospital facility. It’s very expensive, and it’s dangerous because you have radiation. Our spine trainer will solve all three of those problems by reducing training costs and mitigating students’ exposure to harmful radiation sources.

There’s not a trainer in the world that can do what we’ve done. It’s a game-changer that also saves time and money, and it’s saving people’s lives because they’re not being subjected to radiation. We couldn’t be more thrilled with the level of knowledge and expertise the students and faculty provided at GVSU.

Opportunities for the SmartTrainer extend outside the United States, as well, since developing nations and regions that oppose operating on cadavers would ultimately benefit from the spinal training device. In third-world countries where they don’t have good access to surgical training, given the portability of the Smart Trainer and how they have access, they can do this just about anywhere.

Both TenBrink and Brent Nowak, executive director of aMDI, had high praise for the S2T Surgical Smart Trainer and the work involved in developing it. The aMDI group played an integral role in engineering the internal cameras for the SmartTrainer. Our goal was to develop a device that would create a safer, more fulfilling training experience for medical students entering the orthopedic field.

Email us to schedule a S2T Surgical SmartTrainer Demo

Related Spine Surgery Training News Articles
Because the process for creating the spine surgery training platform was such a revolutionary concept, we’ve been featured on various new outlets since the product was introduced to the marketplace.